The Cybernetic Animal and the Shortfall in Taxonomy

the Shortfall in Taxonomy

The uprising of powerful and intelligent robots has been the subject of science fiction for decades. The word robot itself has been introduced to the English language in a 1920 science fiction play called R.U.R. by the Czech science fiction writer, Karel Čapek [1]. Only recently has it started to get in the spotlights for academics and the mainstream media as a serious future threat to humankind. From The ‘Future of Humanity’ Oxford-team project (2013) [4], Steven Hawking’s apocalyptic  (2014) [5] warnings, the famous Puerto Rico AI Conference conveners who initiated the open letter urging humans to keep AI ‘for the benefit of humans’ and ‘not to create something that cannot be controlled’ (2015), to  James Lovelock’s (2019) hopes and insights the ‘Novacene’. All such scholars seem to associate life in machines with the development of artificial intelligence especially as anticipated to be in the future, but the reality – as the evidence demonstrates, that intelligence is not a pre-requisite to life, and that the signs of life in machines predate computers and AI by thousands of years, yet have been missed out on by biologists due the shortfall in adopting holistic cross-disciplinary outlooks since Linnaeus’ Kingdom Minerals was prematurely but terminally abandoned, and the dissection of knowledge domains into narrowly defined specialities; This has resulted in a tremendous boost of molecular biology but a total disregard of any other non-cellular living-systems. The only knowledge domain that is able to cut across most areas of expertise today to describe such a dilemma would be Cybernetics known as the study of self-regulation in animals and machines (Weiner, 1948), as well as  social organisations. From a Cybernetics perspective, machines are living systems as they process energy/matter recursively and therefore from a fresh liberated biological perspective machines could – and should, be seen as living as any species of animals, fungi or plants, being self-regulatory ‘replicators’ regardless of what triggered their existence; I hereby call the emergence of machines as the Cybernetic recombination – parallel to biological recombination and cosmological recombination, where the human mind-power of Cybernetics induces the re-alignment of matter (elements) in a manner that allows purposeful recursiveness operation and replicability through the uniquely-human use of cognitive media & artifacts. Once a replicable living-system has emerged, regardless of its origin, it evolves organically subject to natural selection under the two great laws of ‘organic’ life, ‘The unity of kind’ and the ‘circumstances of existence’ as defined by Darwin in his Origin of Species. Worthy to note here, the the term organic is used broadly since it means different things in different knowledge domains. Examples from natural history show us that machines have always behaved as species and specifically as associated organisms and have been capable as such as homeostasis (self-regulation), metabolism (processing energy/matter recursively), reproduction, and evolution; all by trading services off with humans – so far.

Machines are formed in observation of the same natural forces/interactions that trigger and maintain life on earth; in this respect, engineering could be regarded as biology by design. That’s why a biologist like Dawkins, R. [9] doesn’t seem to find difficulty in stating that ‘animals are machines made by their genes’, but why are biologists reluctant to admit that machines, by comparison, are animals is a puzzle. The life story of a machine begins by the emergence of a blueprint. Once a viable blueprint of a self-regulatory system has emerged, the system is no longer the aggregate of its simple components but a new singularity occupying a new space as it performs new processes towards a new function. Such a function is originally built-in to suit one or more of the human purposes in a manner that invokes provision in terms of energy supply, maintenance, and replication (with a difference) that eventually allows evolution. A car, for example, gets served by providing a service to a human and by doing so, the machine mobilises resources for its subsistence and maintenance on the individual level, and a chance of evolution on the species level. Additionally, you’re forced by the co-evolutionary circumstances to treat the machine gently and with respect; You take driving-lessons and have to pass tests to be able to handle the machine and protect it from injury – so to speak. If and when it gets injured, you’ve already paid an insurance premium to restore it  back to health when possible. You also dissect out of your own energy to have it checked annually (MOT) and to bail it out when it violates the highway code. Such behaviour on your part is dictated by the ‘circumstances of existence’ and is hardly voluntary; It’s Life! It might be seen that machines don’t reproduce on the individual level as other living organisms do, but the reality is that, in their own way, machines reproduce in patterns that are not totally unheard of in nature. A striking illustration of this in nature is the case of Atta and Acromyrmex ant species (leafcutter ants) which spend a great deal of their hard-earned energy providing food and convenient habitat for a specific fungal species from the family Lepiotacaea that they rear for food. From one point of view, those ants exploit the specific fungus (representing machines in our example) for food but from another point of view, the ants have evolved to serve the fungus’ vital purposes; The ants provide the fungus with the substrate,  protection against competition and pathogens, as well as dispersal opportunities in a way that allowed the fungus to stop wasting energy on producing spores (or mushrooms) for propagation and commits to the production of highly nutritious mycelium for the ants while its survival is already guaranteed through the obligate symbiosis and vertical transmission. Other sterile individuals who are served reproduction by trading other services off with a higher organism also include some species of bees and termites. 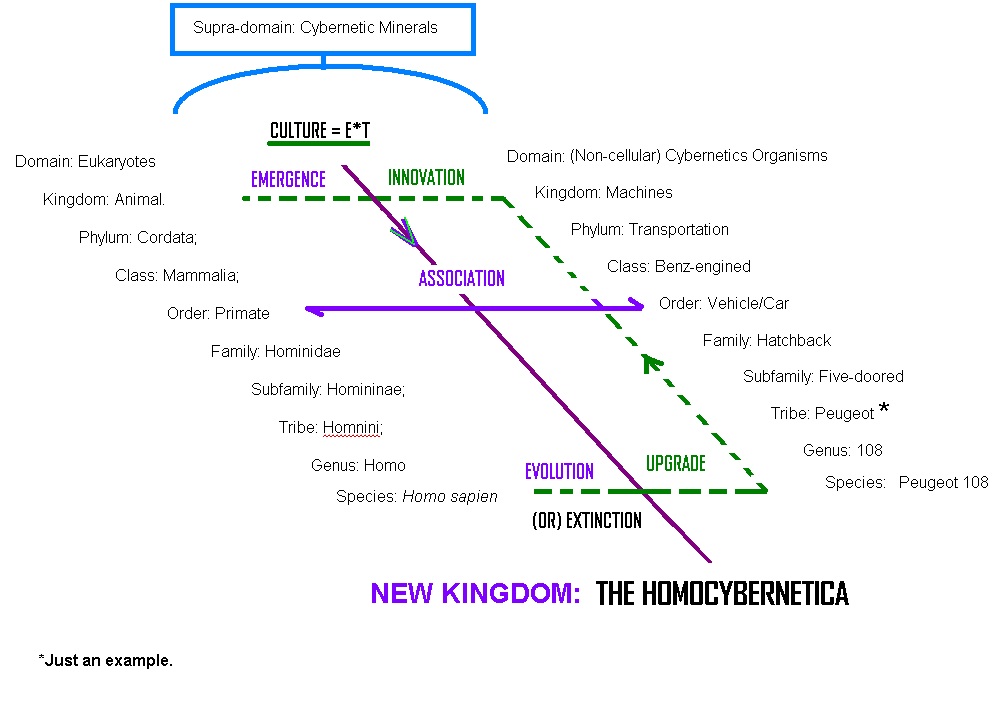 Useful to remember here that consciousness is not a prerequisite for life but functions are. Myxomycetes, for instance; or the slime molds, are single-celled organisms that are neither animals, fungi, or plants. While lacking brains or any sensory systems they were found to behave ‘intelligently‘ when one or more sources of food are available [26].  What level of consciousness allowed the single-celled

Acknowledging technology as a form of life puts humans, without a doubt, in a distinctive position within the taxonomic order; A position they have yet been denied. Both Darwin and Linnaeus were able to see the distinction in the human mind but couldn’t at the time see the gravity of such distinction as the advancement in technology was in the cradle or so it seemed. Linnaeus calls the human-kind ‘wise’ but hardly away from an ape in the taxonomic order, while Darwin thought the distinction is in level and not in kind. ‘Man’ had not flown in the days of Darwin or built a space station or satellite; no Chimpanzee ever had; any outcome of learning or reasoning in intelligent animals, unless selected, are like a sand castle build on the beach and washed out by the waves at the end of the day; The human mind powers are specifically distinct in capabilities of abstraction, longer attention span, sophisticated communication including the use of cognitive artefacts, and finally education (distributed, preserved, replicable, and assessed knowledge passing across and down to generations). According to the proposition in hand, the human-kind triggers the existence of machines as an extended phenotype then becomes their companion as they evolve into living systems then is exposed to their rivalry as they evolve into autonomy with an augmented capacity. Humans trigger the existence of technology and interact with it through culture. Culture from a Cybernetic-biological perspective resembles a virus in its structural dependence on a living host of which behaviour it modifies and survives through and so, from this perspective, culture evolves organically and is uncontrollable.  Although viruses are mostly known to be harmful, in many cases they have been found to perform an array of vital roles in evolution [18][21]. In this respect, culture serves as a DNA supplement capable through a unique biological tripartite of mobilising energy into the human organisation way beyond its initial capacity. A tripartite comprising a plant, a fungus also exists in nature; One example is the case of chestnut with the chestnut-plight, Cryphonectria parasitica, and the virus, Cryphonectria hypovirus 1 (CHV1). An even closer parallelism is the case of the heat-and-acidity-tolerant grass, Dichanthelium lanuginosum, commonly found in geothermal areas within Yellowstone National Park [23] thanks to a symbiotic relationship with the fungus, Curvularia protuberata, and the virus CthTV .

Correcting the taxonomic identity of the human-kind and technology is critical to the conservation of life as we realise that we don’t and can’t ‘control’ the evolution of cybernetic beasts but are perhaps only able to devise some legislation to protect the human-kind from their rivalry long enough to secure co-evolution while machines gain their autonomy. Most machines are currently reliant on our social skills as well as legislations to make up for their lack of empathy, the outcome of thousands of years of intelligent existence and co-evolution. As machines are on the route of independence through artificial intelligence, unsupervised learning, and renewables before evolving any social instincts or collective consciousness, we are in danger of losing the battle of conservation for good if we don’t at least start by calling a spade a spade.

A proposed taxonomic identification for the human kingdom comprising the tripartite, humans, associated technology, and the economic system, is the Homocybernetica.

Full text with reference is in the ‘Cybernetic Recombination, on the Biology of Technology, Revisiting Linnaeus Kingdom Minerals’. [glad to send a copy if required]

Where Can I Get Help for my Assignment?

The deep brand: a cybernetic and practical exploration of organisation identity